AOG and Shale Drilling....What’s Next?
Written by Junior Jenkins, Geologist

We are living in the midst of a shale energy revolution and ABARTA Oil & Gas is in the thick of it!  ABARTA and shale gas have a relationship that goes way back, back to when the company became actively involved in the nuts and bolts part of the oil and gas business.  One of the company’s first acquisitions was United Recoveries, Inc. in Pike County, Ky.  Shale gas production is nothing new in eastern Kentucky with early shale wells being drilled before 1920 with old cable tool rigs.  The early stimulation method to get the gas moving was to load up the hole with nitroglycerin and create a down-hole explosion.  This was a precursor to our modern day fracing, not as effective but much more dramatic!  The United Recoveries wells were producing “dry” gas from the Huron formation of the Devonian Shale interval, an organic rich deposit located across most of the Appalachian Basin from Tennessee to New York.  The lower part of the Devonian Shale interval contains the Marcellus shale which is most productive in northern West Virginia and throughout Pennsylvania.

The unique feature of shale gas is that the source of the gas and the reservoir holding the gas is the same rock.  This is known as a resource play.  Geologists have always known these organic rich rocks were full of gas, but the tight nature of the rock usually only allowed commercial gas production when natural fractures were encountered during drilling, so the gas could more easily flow to the well bore.  I think everyone was surprised at just how much gas these rocks could produce when horizontal drilling and modern fracturing techniques were developed.  The shale revolution is on!

ABARTA Oil & Gas is actively involved in the Marcellus shale in Pennsylvania and the Utica shale in Ohio.  The Utica shale is older (and deeper) being Ordovician age (~450 million years); as opposed to the Devonian age shale (~350 million years).  The Utica shale ABARTA is involved in is located in the “wet gas” window.  This means during the conversion of organics to hydrocarbons, the organic quality and thermal range was just right for liquids to form with the gas.  These liquids commonly include ethane, butane, propane and light oils.  Wet gas is generally more valuable because the liquids can be stripped out and sold separately.  That’s why everyone seems to be looking for wet gas today.  With the massive success of Marcellus and other shales throughout the country, the price of gas has fallen and any boost to improved economics by adding liquid hydrocarbon production is being pursued.

ABARTA Oil & Gas is committed to continue developing opportunities in the Marcellus and Utica shales, but what is the next new shale play?  ABARTA is currently working on a potential new shale play in Kentucky called the Rogersville shale.  This is a brand new shale that has never produced commercial gas, but information from some old deep test wells indicate potential for vast reserves at great depths.  The Rogersville shale is even older and deeper than the Marcellus or Utica shales and is Cambrian age (+500 million years).  This makes the potential shale play extremely risky and expensive, but the rewards could also be extreme!  The Rogersville shale play is located in a deep, narrow sub basin in eastern Kentucky called the Rome Trough.  Drilling depths will likely be about 2 miles deep!  It is anticipated that this deeper basin has preserved organic rich shales and a resource play can be established.  While data is limited, ABARTA is busy interpreting information and assembling a prospect for the Rogersville shale.  This shale should also have some liquids associated with it.  One very positive to this play is that ABARTA Oil & Gas has over 60,000 acres leased in eastern Kentucky that may be prospective for the Rogersville shale.  A lot of this acreage is held by production from shallower zones with additional acreage being leased when available. 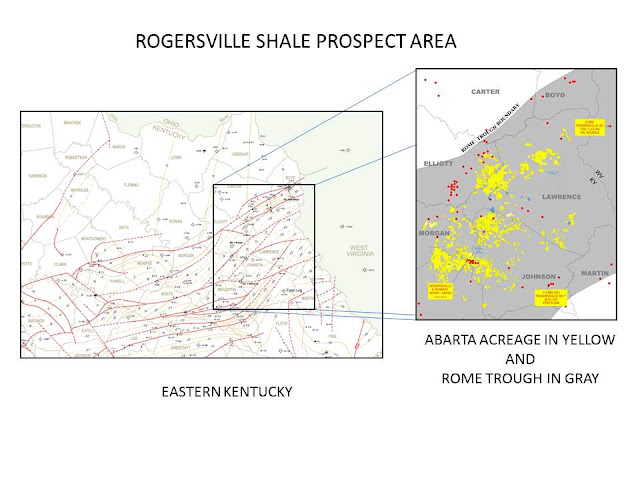 The ABARTA geology team is busy and committed to developing active shale plays and identifying new shale opportunities wherever it may lead us.  We plan on being in the shale game for a long time!